Can you spot the fake Birkin above with just a glance?

When you purchase a luxury product, you get a lifetime guarantee. Chanel, Hermès, Louis Vuitton—they stand behind their products. They are investment pieces and the prices have grown exponentially. When you invest in a knockoff, you’re not investing in anything. You can’t resell it, and when it starts wearing or falling apart…you’re kind of at a loss.
We will give you side-by-side comparisons of authentic and counterfeit bags from these brands, pointing out the subtlest of differences that can determine whether they’ll spend upwards of tens of thousands of dollars to purchase a bag from a consignor. Check out our tips below—because even if you can’t afford a Chanel Boy Bag, you can pick up a neat little party trick. 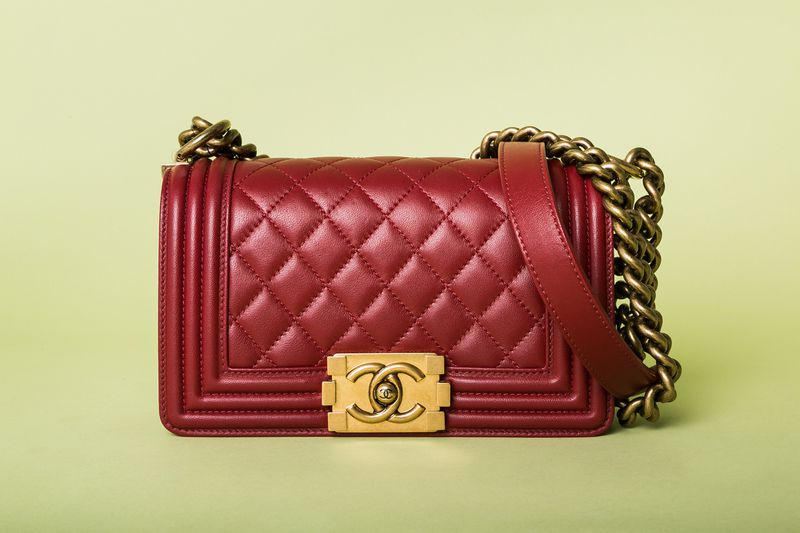 The Boy Bag, pictured here, is one of Chanel’s most popular purses, a modern take on a classic style. It’s one of the most expensive bags they sell, and they’re really hard to get in stores, which makes it a hot commodity on the resale market—and the counterfeit market, too. Just by looking at the pictures above and below, can you tell which bag is real? 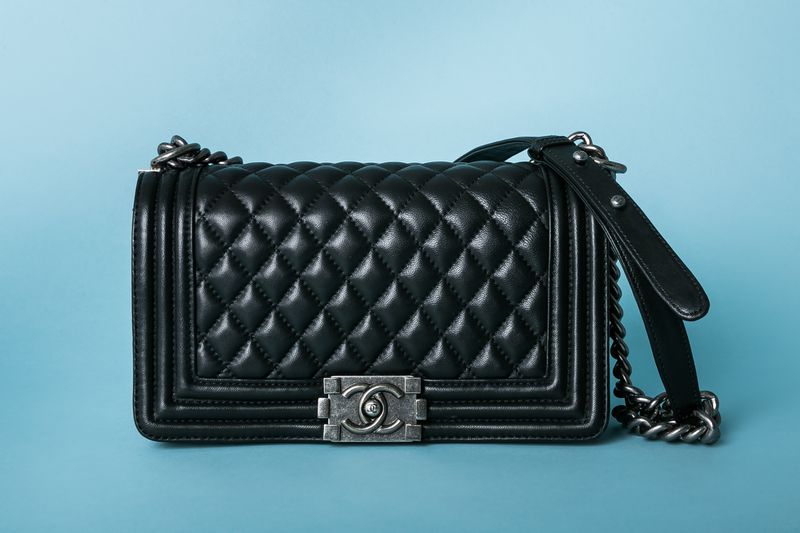 Answer: It’s the second one.

Fake producers have gotten really good at mimicking the outside of the bag, so you should look for clues on the inside. 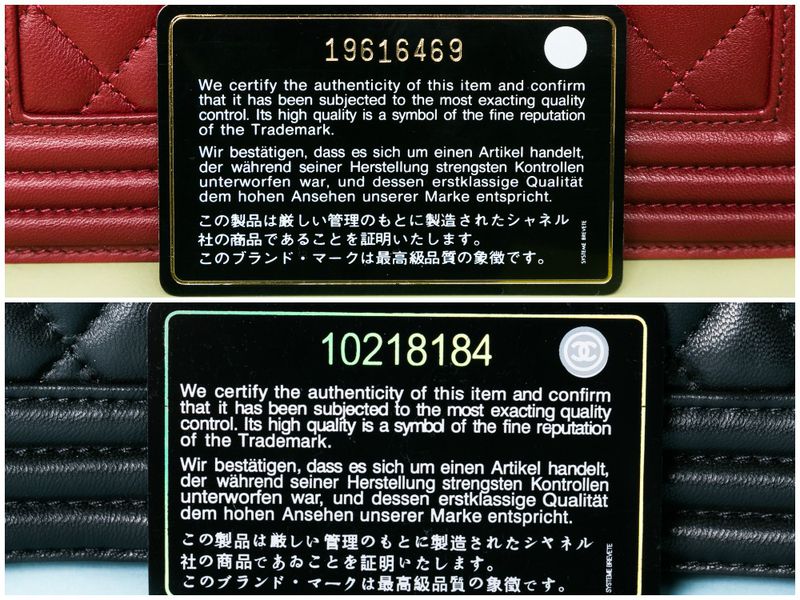 Reminder: Just because a bag comes with an authenticity card doesn’t actually make it authentic—counterfeiters fake those, too. In fact, you should always be wary of authenticity cards when buying outside of a brand’s official store: Louis Vuitton and Hermès bags don’t have them, but fakers will lure unassuming customers with them anyway.

In this case, you could spot the fake bag on the bottom. You can see that this has a hologram to it, while authentic authenticity cards just have a gold trim. Other inconsistencies include the font size, the type used for the bag number, and the fake-looking symbol sticker on the upper right corner. 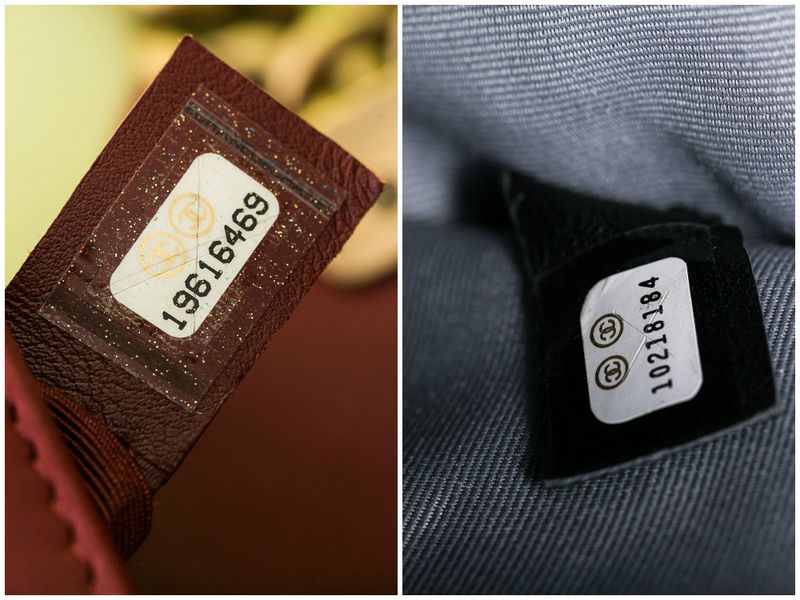 Regarding the hologram on the card, this mistake was probably made because they have something inside them called a hologram sticker, which is what the card number is supposed to match. The manufacturer of the fake bag likely confused the terminology, which accidentally outed his product.

Another tiny but important clue? The inside label—notice how the top of the text isn’t parallel to the stitching on the right? It slopes down just ever so slightly, but real Chanel product inspectors wouldn’t let a detail like this slide. 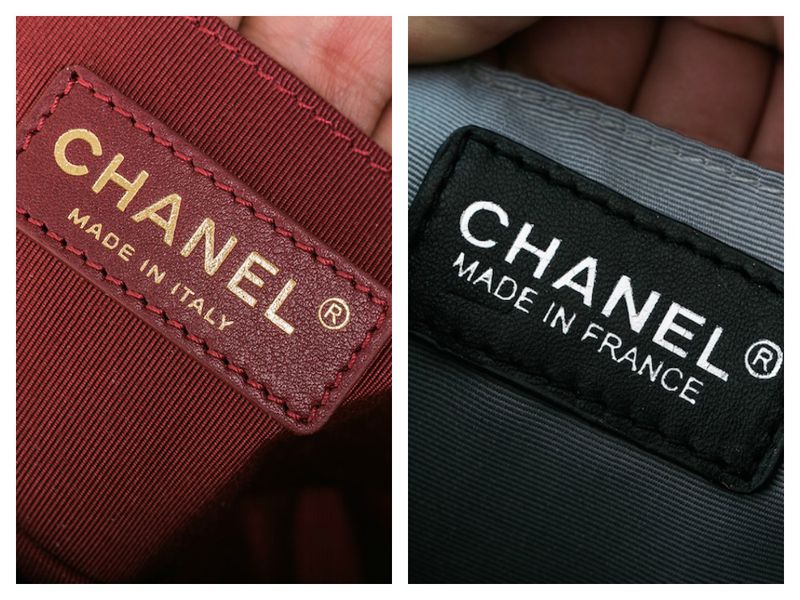 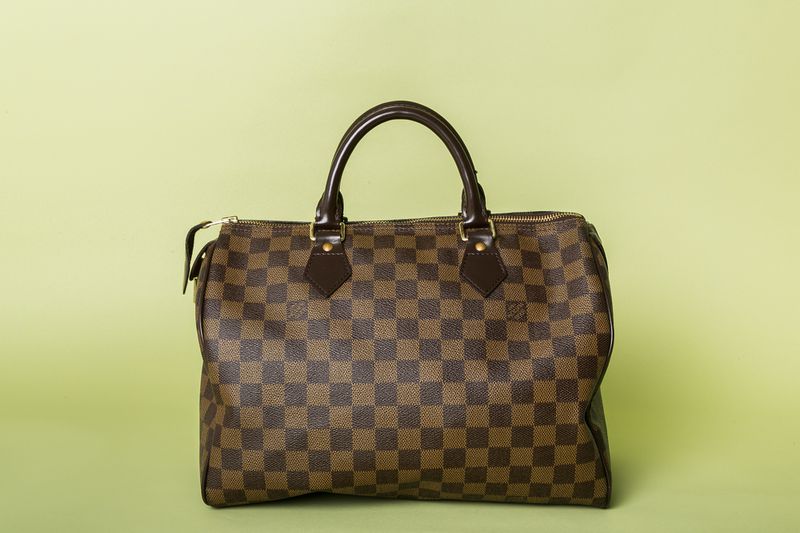 At first glance, a counterfeit Louis Vuitton bag can easily pass as real. Maybe the color might be a little off, but if you don’t have it side-by-side (with a real bag), it’s hard to really notice. The above bag is authentic, but below is a counterfeit. Hard to tell, right? 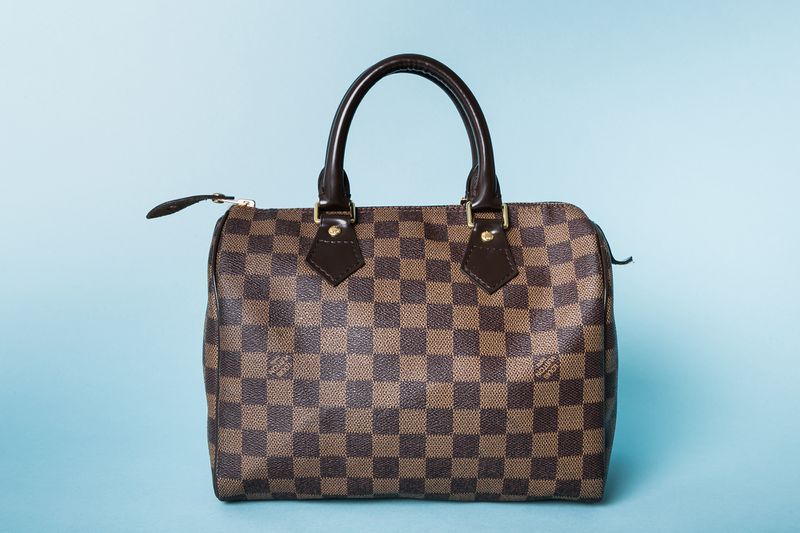 Plus, the color changes over the years. In this Damier print, which has been around since the ’80s, “sometimes it has like a green undertone. Maybe someone would look at and think it’s fake, but it’s not—it’s older. It’s just different.

A big indicator is whether the bag has a proper identification stamp. The letters are code for the country in which the bag was made, while the numbers indicate when it was made. The second and fourth numbers stand for the year (so 2008, in this case), while the first and third numbers are for the week in that year (here, the eleventh week). 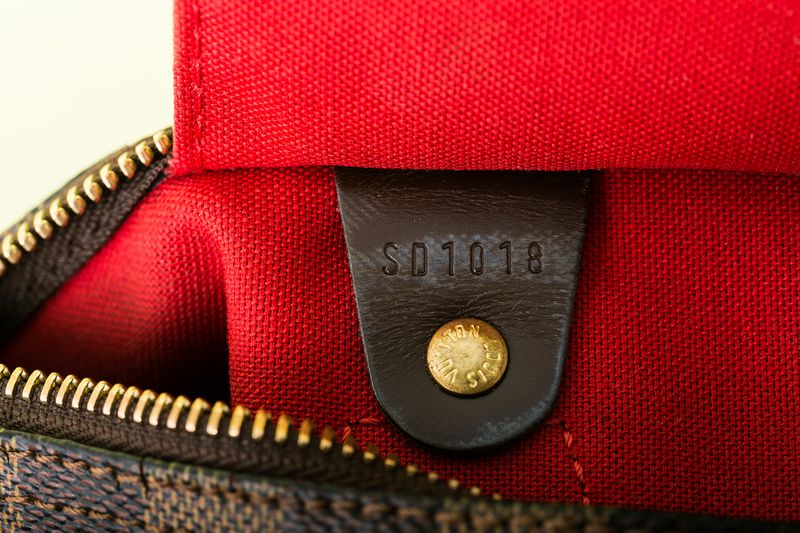 First, Louis Vuitton was doing the month and the year” in the stamp number. Then the counterfeiters caught on, so now they do the week of the year—a number out of 52 instead of a number out of 12—to throw them off. Also, they started assigning different letters to different regions. CA is not the only two-letter [combination] that is associated with Spain, for example. You could have CA and, like, five other different letter combinations mean Spain.

You perfect something, and then they change it because the counterfeiters are on top of it, too. That’s why a lot of the stamps on fake bags are the same as the real ones—so if the stamp looks correct, hunt for other inconsistencies.

Stitching, for example, can always be a clue. You should look at the stitching really closely. Something that’s different in these two is the stitching on the fake bag (right) is sloppy and not really straight. The stitching is also pressing too tight into the material, making it look cheap. 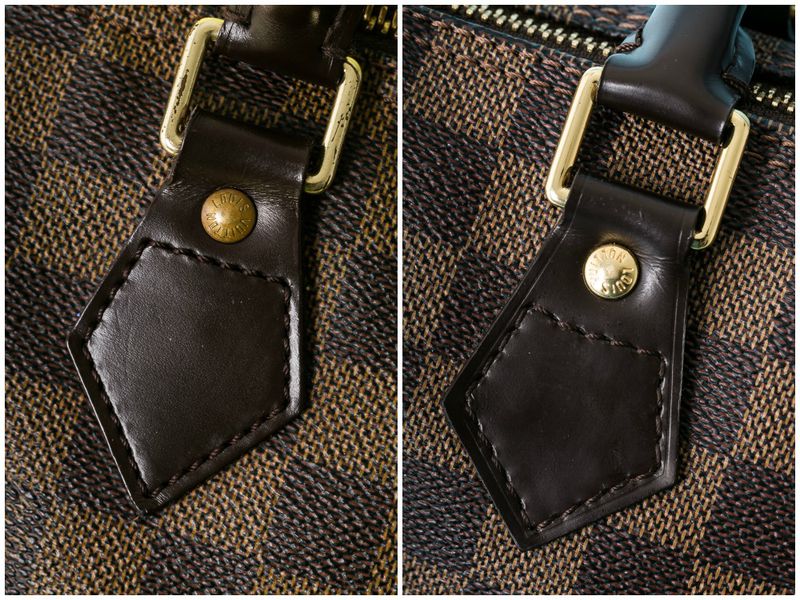 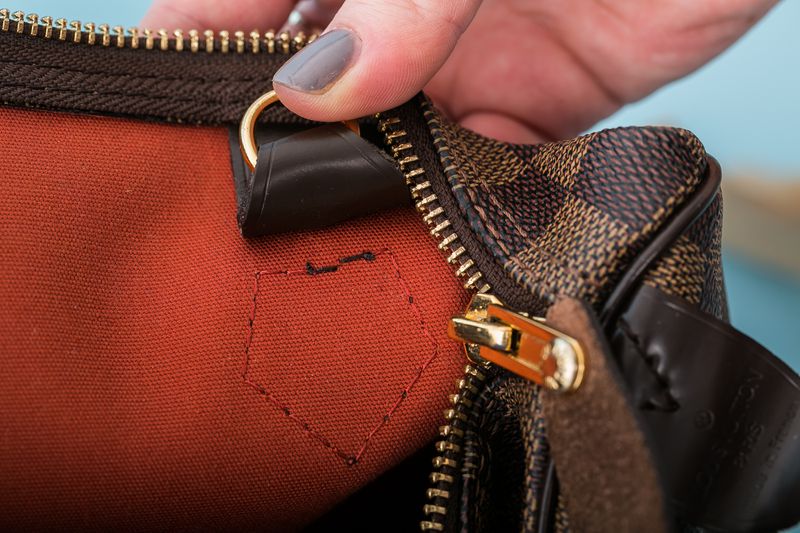 Again, any little detail that’s less than perfect can be a red flag. The fake Louis Vuitton bag in the pictures, for example, has problems with the leather tab on its zipper pull (left). You can see how there’s extra fabric here. The gold fastener attaching the tab to the zipper is always really close. That’s a big key right there. 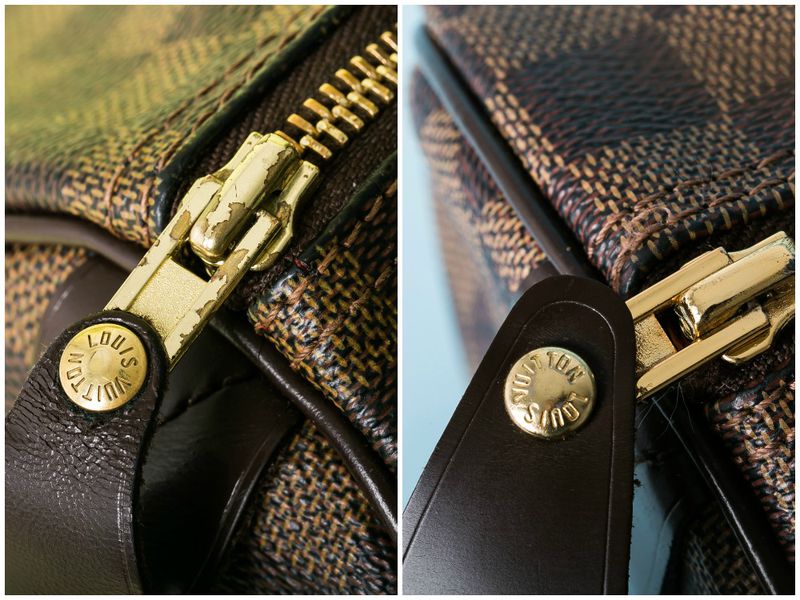 First, check out the label stamp on the top of the bag. You can’t see too much of a difference here, but the stamp is pretty high and close to the stitching on the authentic Birkin (left). If you see it in the middle between the stitching and the lock, that’s a dead giveaway. Note how the stamp on the fake bag also appears to sit on top of the leather, while the authentic stamp is really a part of the fabric.

You also want to make sure the stamp is straight, this detail was a giveaway on the Chanel label. These are little details, but they make a difference. 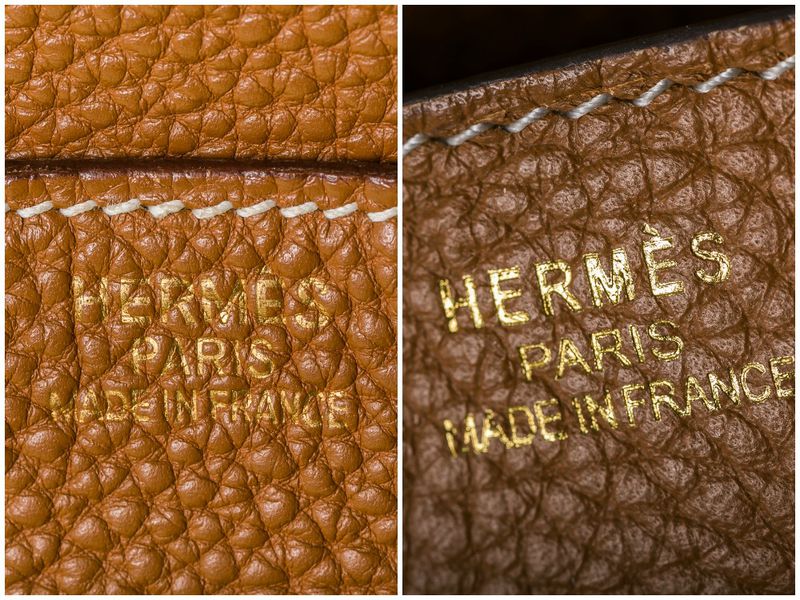 Check out the label stamp on the top of the bag

Next, undo the lock and pull back the arm to reveal the blind stamp. Every Hermès bag is handmade by one artisan, so they put their own trademark (stamp) on it, along with the blind stamp, which indicates the year it was made. But the presence of the stamp alone might not distinguish a counterfeit. This fake has a blind stamp and it has an artisan stamp. They knock off everything—serial numbers and all.

So in a case like this, look at the stamp’s quality. It’s very deep, like it was machine-stamped of the fake bag (top), and it’s a larger size than a real stamp. On the real bag (bottom, with close-ups of each stamp), it’s much fainter. You can hardly see it from where you’re standing. 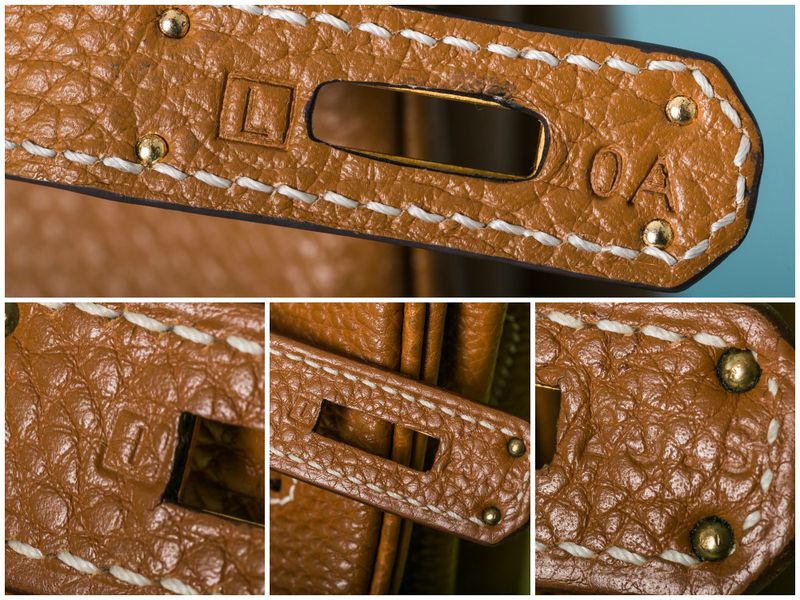 Look at the stamp’s quality

Even if you don’t have a certified authentic bag to compare a suspect against, you can be on the lookout for any inconsistencies on details like hardware.There’s always going to be one place where it’s just not consistent with the quality of the brand, and a lot of times it’ll be in the hardware. For instance, we can tell that this hardware is plastic—It doesn’t get cold, and it feels lighter.

And once again, stitching is a factor that reveals the fake’s identity. At first glance, this looks stitched neatly. But if you start looking at finer details—edges and corners—you’ll notice around here the stitching gets sloppy. Those are inconsistencies that you won’t find in an authentic bag. It’s going to be neat and consistent throughout. 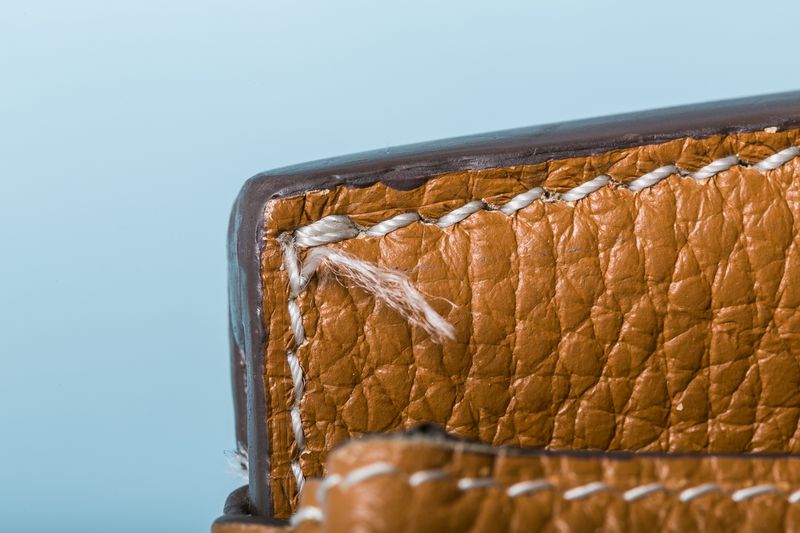 Same goes for the paint, even on a nearly microscopic level. There’s a little bit of sloppiness, paint that’s transferred over on the edge here. And sometimes people will think, ‘Oh it’s hand-painted so, that allows for inconsistencies. Not with Hermès. They’re perfectionists.

By the way, it’s the one on the right that’s fake.